Agility is more than physical

Agility is more than physical

During my soccer career, I always wanted to increase my agility. I wanted to win every 50/50 ball to the point where I didn’t refer to them as 50/50’s. In my mind, it was my ball to lose, not a coin toss. The mental shift may have contributed something to helping improve my agility, but in reality, I was only consciously training change-of-direction (COD). There is a second component to agility, though, and it wasn’t until college that I actively pursued training it.

Before we go on, I want to define agility and change-of-direction.

Change of direction (COD): The ability to change initial direction to a predetermined location.

Agility: The ability to change direction or velocity in response to a stimulus.

Both involve changing direction, but agility adds a mental element, as it’s your overall ability to react to the unknown. Great players excel at reading the movements of other player and quickly determining what to do next. Most of the time agility is viewed as a defensive ability, but for this example you should watch Messi use his agility to meg these defenders, since it is much more exciting than watching defensive highlight videos.

Clearly Messi isn’t just guessing where to place the ball. He anticipates and then reacts based on the defender’s position.

There is plenty of literature to suggest that agility and COD are different skills (1,2,3). This diagram does a good job at showing how the two are related: 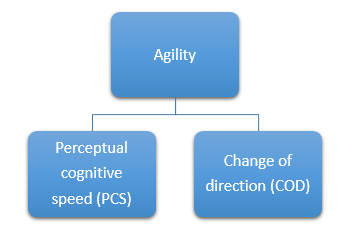 To maximize sports performance you need change of direction, but inevitably want agility. Early in my soccer career all my training was devoted to COD drills, sprinting from one know point to another. I did get faster at COD, but the best players also have high levels of perceptual cognitive speed (PCS), and only training COD will not improve it.

PCS sound a little too cerebral for an article that’s so far been about megging defenders. Instead of PCS we will use mental ability, which is really a player’s ability to “read” the game.

In fact, faster COD does not predict the best players, but agility may. In my favorite example, Australian football players were split into two groups based on the previous year’s personal performance, high performing (HP) and lower performing (LP) (3). The HP players were 5% faster during agility tests but not faster during COD test.

What makes up mental ability?

We see an example of mental ability in action in this group of elite youth soccer players, who were 12% more accurate in anticipated passing direction than sub-elite players during game play. Anticipation allows you to be in the right place at the right time because you know where the ball is going.

It’s tempting to believe that these agile athletes simply have faster reactions in general. Fortunately that has been tested for, and elite soccer players are not faster than inexperienced players when testing reaction time using flashing circles (5). This suggests that agility and accuracy is learned, not genetic or predetermined.

The real question is should you be focusing on COD or mental ability?

Most of your training time should still be spent on COD. Most young athletes are nowhere near as strong or as fast as they could be, so training their physical abilities will almost always have a high potential for growth. Most likely you’re already working on COD though, with conditioning drills, playing, plyometrics and strength training. Mental ability training can be incorporated alongside traditional COD training, and by training both at once you can start unlocking your athletes’ full potential.

Here are 2 ways you can start addressing mental ability.

Instead of only used traditional line drills for conditioning, incorporate reactive directional elements. In the example below you will sprint 5 yards and then react at the green dot to a coach or teammate passing the ball left or right. It should feel like a hard sprint with one decisive cut to the ball.

I’d use the drill above as a teaching opportunity to teach you how to read body position. Nearly any drill you already do can be altered to improve metal ability if it involves teaching an athlete where to look and what to look for. In this drill you want your athletes to focus on the coach’s hips as they prepare to kick. If they are only watching the ball, they will only be training how to fall for fakes on the field.

With both mental and physical components it’s essential that the drills require you to react to sport specific movements. Simply pointing a hand to cue a reaction won’t help a soccer player read an opponent. You can use hand pointing to teach how to cut and turn, but that is training COD, not mental ability to read soccer specific cues.

Despite a long name, perceptual cognitive speed (our mental ability) is simple to implement by adjusting some of your classic conditioning drills to add a reactive element that is sport specific. Ideally the drills are done at the beginning of practice, when athletes are mentally sharp.

Adding specific coaching cues about where an athlete should look or what to look for is another way to integrate mental ability into drill you already use.

By incorporating the mental aspect of agility into regular practices, players will improve faster and start feeling more confident on the field.