The “core” is always being redefined in the fitness industry and probably for good reason. There are a number of components involved: diaphragm, pelvic floor, rectus abdominis, transverse abdominis (TVA), spinal erectors, multifidus, quadratus lumborum (QL) and internal/external obliques. This is not an all encompassing list, but it will be a good starting point. 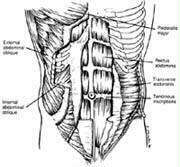 All these components are responsible for different movements/stabilization, which is why it’s important to train your core in different planes of movement. Unfortunately, most of the time we focus in on just one muscle, the rectus abdominis.

For the average gym member a core workout will consist of 500 sit-ups, 5 minutes of biking abs and a finisher of crunches until they can’t sit up and their neck fatigues. Now this might be exaggerated a little. However, I’ve had this routine, or ones very similar, explained to me on multiple occasions. I don’t fault athletes for using these exercises, but I do try to educate the importance of other areas and methods, I’ll get to those shortly.

Problems with those exercises:

If you’ve ever heard of Dr. Stewart McGill you are well ahead of the curve. He’s the leading expert in low back research and has been for years. He believes that a proper sit up can be done, however it’s incredibly difficult and doesn’t look anything like this:

Here are my biggest concerns with typical sit-ups. Due to our technology based world we spend a lot of time at a computer and sitting in the car, which hasn’t been great for our posture. Then we go to the gym, bench press and do sit-ups, which all compound to create more bad posture, poor breathing patterns and a dysfunctional core. But you thought core training was good?

For a simple example, when your scapula abducts and tilts anterior (hunched over), you decrease your shoulders subacromial space, resulting in an increase in shoulder impingement and potentially pain. So, if you have shoulder issues, sit-ups are out. If you’re sitting at your computer and have been for hours, sit-ups are out.

This is just my personal opinion when it comes to excluding sit-ups for my clients training programs. I think there are plenty of other core exercises that come closer to fulfilling the function of the core. Just doing sit-ups neglects the core’s function to: assist with breathing, resist spinal deformation and transfer power between your arms and legs. Instead of just thinking about forward flexion (sit-ups) to train the core, use these categories to help iron out your core training – Anterior, Lateral, Rotary and Posterior. We will focus on the first 3, because most of your posterior training will come from lifting exercises (Deadlifts, RDL, Good-mornings, etc;).

All the exercises I’ve shown require that you stabilize the spine and resist any spinal motion. I don’t think you should remove all spinal movement based core exercises, however you have to earn the right to train with motion. It’s been documented that repetitive spinal flexion can lead to disc problems. In fact, forward flexion may be the worst possible motion for your spine. McGill’s recent study examined the role of rotation on disc herniation’s and compared them to repetitive flexion. In short “Axial torque/twist alone was unable to initiate a disc herniation.” Which is good for back health, however there were other potentially negative effects on the spine but forward flexion represented the most disc displacement.

Core training is more than just working on your “six pack.” Remember to train the other categories of core, you’ll have a healthier and happier body.